December 30, 2018 Comments Off on Paper mills under pressure to reduce water footprint News  2

Despite huge advances in technology, the paper industry remains one of the biggest consumers of water on the planet. For every tonne of paper produced, it takes around 54 cubic metres – or 54,000 litres -of water to produce.

Water is intricately associated with all the three stages of paper production namely, pulp making, pulp processing, and paper/paper board manufacturing, and their associated activities of cooking, bleaching, and washing.

According to industry experts, about 85% of P&P industry water use is for process water, which is contaminated during the manufacturing process with sediments, effluent solids, chlorinated organic compounds, organic halides (AOX), and chemical oxygen demand (COD) and biological oxygen demand (BOD) contaminants

In recent decades, costs associated with environmental impact and regulation, sourcing fresh water, and the increasing price of energy have all exerted increasing pressure on the industry to reduce its water footprint and increase water efficiency.

“Every mill will have its unique water profile depending on how its sources it water, how it reuses water and how it eventually disposes of effluent, he said.

“Each step offers opportunities for saving cost and ultimately saving the environment.”

Water can be drawn from public supply, ground water or surface water taken from rivers and streams. But in each case-including tap water- the water will have to be processed before use in production. Typically, water will be decontaminated through carbon filtration or a process known as reverse osmosis which forces water under pressure through a membrane to isolate impurities. Another technology used for purification is Dissolved Air Flotation.

Dissolved air flotation is a water treatment process that clarifies wastewaters by the removal of suspended matter such as oil or solids. The removal is achieved by dissolving air in the water or wastewater under pressure and then releasing the air at atmospheric pressure in a flotation tank basin.

One centuries-old technique for water collection is enjoying a come-back in the fight to conserve water- rainwater harvesting. This method involves collection rainwater from rooves for future use. Given that the UK gets an average of 33 inches of rain a year, the potential to accumulate thousands of gallons is well within reach. Experts estimate that for every inch of rain that falls on a catchment area of 1,000 square feet, you can expect to collect approximately 600 gallons of rainwater. Ten inches of rain falling on a 1,000 square foot catchment area will generate about 6,000 gallons of rainwater.

The greatest contribution to water saving, however, comes from the re-use of water. Typically, water recycling operates on a closed loop system where the water is retained in the system, treated and reused.

Research by Environwise shows that on average, the cost of effluent treatment and discharge is approximately five times the cost of supply.

Treatment options include primary treatment such as clarification to remove solids and particulate matter, and secondary biological treatment processes for removing biodegradable organic matter and decreasing the effluent toxicity.

Dealing with the huge amount of sludge produced in the pulping process requires the application of many different, mechanical chemical and biological technologies which filter out the waste material and prepare the recovered water for release into the drainage system.

One mill to have benefitted from investment in recycling technologies is the Jeddah-based Middle East Paper Company (MEPCO). In 2006 the company increased its production capacity from 100,000 tons/year to 250,000 tons/year, and in 2010 this further expanded it to 400,000 tons/year, thereby substantially increasing the demand for raw water.

At a capital cost of US$5,700,000, funded entirely by MEPCO, plant water demand reduced from 20,000 litres to 5,000 litres per ton of product, adding to the total reduction of 6,000,000m3/year. The return on investment for all technologies installed only took approximately two years. The plant also recycles 2,500kg of paper each day.

The UK has made significant progress in reducing water usage.

The Confederation of Paper Industries claims that over 85% is cleaned and put back into rivers, estuaries or other watercourses – often cleaner than when it was taken out. Between 2001 and 2011 the UK Paper Industry reduced its water usage by 24% per tonne of paper made.

One good example in the UK is The Chesterfield Paper Mill which undertook a project to reduce the use of fresh water to dilute thick stock from 12% solids to 5% solids by replacing it with recovered water, ie effluent that had received primary treatment.

At the beginning of the project, the mill estimated it was using 17 m3/ADt of product. Using recovered effluent instead of fresh water has allowed the mill to reduce its specific water consumption by just over 2 m3/ADt, a reduction of nearly 12%.

Despite the impact of the digital age, paper is not going away- sadly, the same is not true for water. 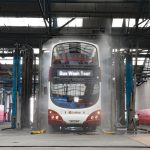